Hi there everyone! Sorry for the delay in telling you about November’s challenge, I know you all get super depressed when I don’t keep you updated.

I asked Norman to give me a challenge when he came to San Diego to help me with the August “Losing Control” challenge. After we zip-lined over rhinos, I was in a pretty adventurous mood. So that might not have been the best mindset to talk to Norman about his challenge. His initial ideas didn’t really take flight – such as pulling a prank every day or changing someone’s life. But then he suggested going a month without any music and I nearly had a heart attack; music is a huge part of my life (I’m one of those ‘playlist for every possible occasion’ people). So then I countered with, “How about no television instead?” Norman seemed to like the idea, but then he raised the stakes: “How about no videos at all? No TV, movies, videos, nothing.” Because I was feeling particularly adventurous at the time (after all, I had just conquered the zipline), I wholeheartedly agreed, under the condition that I could still use online videos for research and teaching. We shook on it and the challenge was set.

I was feeling pretty confident about the challenge right up until the last week in October. I was finishing up the food challenge and hadn’t given much thought to November. When I remembered what I was in for, I immediately started to regret being so cavalier with the whole “No Videos at All for a Whole Month” idea. To understand why the idea was so daunting, I need to explain to you my own love/hate relationship with television (and, by extension, movies).

I sometimes wish “TV” counted as a socially acceptable hobby. Maybe it does and I’m not really aware of it. But I am aware that, in my particular social circle, saying that you really love watching TV is akin to saying you really love skipping through a field of weeds and dead flowers: weird and probably a waste of time. I really like TV, but I also loathe it. I like what TV does for me, but I also hate what it does to me. Let me elaborate…

Things I love about TV:

I like TV for the same reasons that everyone else does – it’s a fun way to tune out the world and watch the shows you like, you can do it by yourself without feeling like a hermit or a weirdo, it requires little energy so it can be very relaxing, you can watch it at any time of day (or night), you can get all kinds of information from it, and you can watch things alongside other people that have a similar interest. When I think about TV like that, what’s not to like? But, oddly enough, most of the same things I love about TV, those things that it does for me, are also the things I hate about TV because of what it does to me.

Things I hate about TV:

The same things that I like about TV also morph into the things I hate about it. Mostly, I hate the way that TV makes me feel mindless and “off in space.” That feeling, despite being bad for my health and productivity, does ultimately feel good. So its hard for me to detach from it sometimes, especially if I’m feeling particularly overwhelmed, bored, lonely, or tired. Therefore, I have a difficult time turning my brain back on once I’ve turned it off to watch TV. When I do manage to turn it back on, I am reminded of the fact that I don’t actually care about the people in the shows I’m watching. I don’t actually care about how this story develops because I am not actually interested in it, rather it is just something to watch – a way to pass the time. Sometimes, when this happens, I have the presence of mind to stop watching, stop DVRing, and generally stop following the show. I’ve done this with many shows over the past couple of years, and I have been proud of myself. But I still feel trapped following more shows that I’d like, and I hope this challenge will help me cut the chord in that respect. 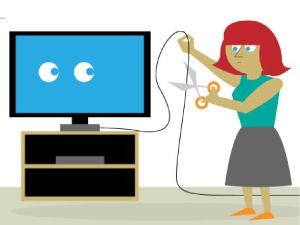 All things in moderation?

I have, on more than a few occasions, wondered if I am addicted to television, or at least predisposed to becoming addicted to television. At times, I have actually confessed to myself: I am a compulsive over-user/abuser of television. Those dark moments usually come at the tail end of spending most of an entire weekday watching TV because I was too overwhelmed or unmotivated to work on my research and writing (a scenario that used to occur with an alarming frequency). Though I have tried to put a stop to those “TV Days,” I’d be lying if I said they never happen. This kind of procrastination is just so easy when you don’t have a boss expecting you to be at work and all of your deadlines are months (and years) into the future.

Over the past couple of years, I have tried to alter my environment and my mental state to manage my tendency to abuse television. Television has always been a staple in my life, especially as a child. But as an adult, I’ve had to actively work on adjusting my life so that it includes less TV. I have set up software programs on all of my computers that block certain websites like Hulu and Netflix, disabled automatic sign-in to these sites, and try to set up goals and consequences with my friends and support network to keep me accountable. I’ve tried keeping a TV journal, but never seem to make a habit of it. Managing TV was much easier when I didn’t actually own a TV and thus could only rely on online television. But since moving into an apartment with a TV and an active cable subscription, I have had to work even harder to keep myself from going into the living room in the morning, turning on the TV, and staying there until the afternoon in a state of mindless stupor. My relationship with TV has required, embarrassingly, almost constant work.

Even though I have been working on my TV habit, I’m still not entirely happy with it. I still feel like I watch too much, too often, and at the expense of other activities I want or have to do. Despite all my efforts, when I turn on the television, I am still easily overcome by inertia and run the risk of staying in front of the television for hours. Watching TV also signals unhealthy “Behavioral Links” which I talked about in a previous post. I guess all of this leads me to admit Step 1: I’m Erica, and I’m addicted to television.

This is all pretty embarrassing to admit, especially admitting it to the internet and my friends and family who read this blog. But in order to give you a sense of why this challenge will be so difficult, you need to understand where I am coming from. This month’s challenge will not only force me to get a divorce with  TV, it will also prevent me from rebounding with non-TV alternatives that essentially do the same thing: movies and online videos. In my life, I can’t remember a time that I have ever gone completely without TV (or TV surrogates) for such a long period of time. And while a month isn’t that long, it will still be quite a challenge.

In preparing for this challenge, I had to enlist the cooperation of my roommate, Elisa, who is, by now, a celebrity on this blog. I had to set up our TV with so many parental controls that it would basically block every single channel all the time. The only way to watch any TV is to input a 4-digit pin, which only Elisa knows. I also stopped all scheduled recordings of TV shows that I watch. I completely blocked Hulu, Netflix, and all other online television sites from all of my computers. I set a 15-minute limit for YouTube, meaning I can only spend 15 minutes on YouTube before my software blocks the site (remember, I can still use short videos for research and teaching). I unfollowed Buzzfeed Video and similar pages on Facebook, and altered my Facebook settings to prevent videos from playing automatically.

I also prepared a list of non-TV alternatives for myself. I found five fiction books that I haven’t read and put them all in my bedroom in plain sight. I watched instructional videos on knitting and other crafts in October so that I could work on them if I felt bored. I figured out what I am making everyone for Christmas so that I could work on those projects rather than watching TV. Other things on my TV alternatives list include: going to the gym, taking a walk, reading at a coffee shop, going to brunch, riding my bike, discovering a new place/neighborhood in San Diego, various home improvement projects (gardening, de-tangling the wires behind the entertainment center), and purposefully reaching out to and spending time with my friends. I think that if I elected to do all of these things regularly, I simply wouldn’t have time to watch TV.

So, with the proper preparations made, I went fiercely (and fearfully) into November’s “Video Blackout” challenge.

I’m bored! I’m insanely productive! I’m tired! I’m energized! I’ve already read 2 books and listened to 2/3 of an audiobook! I have barely even touched my craft projects! Eating alone is SUPER boring so I have to listen to a podcast otherwise I get sad! I miss The Daily Show with Jon Stewart in a way that I can’t even describe! I don’t like being alone in my apartment because I can no longer use the TV as a surrogate friend! I love my actual human friends and that I’m spending more time with them!  I have to quarantine myself in my room when Elisa is home and wants to watch TV (which isn’t that often)! Thursday night was the worst because I absolutely love Scandal and How to Get Away with Murder! I think my left eye is about to spasm!

I’m happy. I feel rested. I don’t feel like I’m going crazy. I miss TV, but I don’t miss it as much as I thought I would. I missed TV the most on Friday morning (when I usually watch Thursday night shows), but managed to get over it. I feel confident that I can do this. And I hope by the time December rolls around I feel a sense of ownership over my TV habit, rather than the other way around.