I have officially finished the list of activities meant to challenge my sense of control this month! I finished AND added a cherry on top! Where I last left you, I had two more activities to complete: attend one more Meetup alone, and try rock climbing. Done and done!

First, let’s talk about the Meetup. I joined a Meetup group that is intended to get people out and exploring San Diego, taking advantage of all it has to offer. The idea is to bring people together at a variety of local places doing a variety of San Diego-inspired activities. I liked the idea: after all, I do live in “America’s Finest City,” right? They host a lot of different events, including a weekly “Happy Hour” event. I forewent last week’s happy hour in order to spend time with my friend. Instead, I went to this week’s happy hour at a local wine bar near my neighborhood. I got there right on time (5pm), and was definitely the only one there for a solid 15 minutes. Eventually, the organizer showed up and we chatted. More people trickled in over the next 20 minutes, and by 6pm there were about 25 people there. However, I noticed a trend. They were all (mostly) middle-aged professionals and there were A LOT of men – somewhere in the ballpark of 5 men to every 1 woman. All the people were very nice, and I enjoyed our chats. A bunch of us started introducing ourselves and giving the others the “elevator speech” about who we are. As we made our way around the group, another theme emerged: an overwhelming majority of them were divorced and getting back on the dating scene. They swapped divorce horror stories with each other, and eventually it became clear that the Meetup was a way for people to, ahem, “get to know each other”  (if you know what I mean). By the time it was my turn to introduce myself, it was so clear that I was out of place. In this context, as a 27 year-old, never-married, gleefully unattached graduate student, I was a social anomaly. I gave my speech, everyone nodded politely, then one guy goes, “Gosh you look like a younger version of my ex wife. Just puttin’ that out there!”

At some point I started talking with a man that looked closer to my own age. We were the youngest people there. We were chatting and then we joined in on another couple’s conversation nearby:

The Craigslist conversation eventually morphed into a discussion of the best and worst dating websites and dating/hook-up apps. Everyone in the conversation was an active user of at least one (but usually multiple) online connection services, including the younger gentleman I was chatting with. During the conversation, someone turned to me and asked, “So what sites are you on?” I politely explained that I wasn’t on any site or app, that I had used them in the past but for the past year or so I haven’t had any interest in starting a new relationship. “I’m just enjoying my own life right now, I don’t really want to get involved with anybody just yet,” I said. Another round of polite nods. Then the younger gentleman let out an audible “Hhhmmm” and, without a word, just straight up walked away from me!

“Well, okay then. It was nice meeting you, too.”

I stayed for another 20 minutes or so, making very pleasant conversation with a middle-aged woman who works at SDSU. While I did’t have an amazing time, I had a perfectly pleasant time at the Meetup. And I made friends with the bartender, so that was a plus! I think I may go to another Meetup with that group, but maybe not a Friday evening happy hour.

I couldn’t stay too long, anyway! My friend Norman was coming to town!

I invited my friend Norman, one of the best friends I have in the entire world, to San Diego for a weekend of adventure. I knew that the rock climbing challenge was going to test my limits and that Norman would be a perfect person to have with me. We also decided to do an extra ‘no control’ challenge to round out the list (more on that later). To do these challenges, I needed someone who would push me to stop being a baby and just do it already. That’s what the best friends are for!

Okay, let’s talk about rock climbing. Norman and I went to a local rock climbing gym in San Diego, Mesa Rim Climbing and Fitness Center, tucked away among office buildings in Mira Mesa. This is no Mickey Mouse organization, to be sure. We walk in, and this is immediately what we see:

Cue: stomach-wrenching nervousness! This is some serious business! We signed a waiver and got a very thorough lesson in tying in, belaying, and general climbing etiquette from one of the staff. Then, we were left to our own devices to start climbing. Ah!!

It definitely took some getting used to. I learned very quickly that you cannot rely on your arms to pull you up the wall – you have to use your legs to push you up. But finding the right little knob to stand on is tricky, and as you’re looking down at your feet to figure out where to place them, you shouldn’t look past your feet to see how high up you are. Here’s me in action, probably the awkwardest rock climber in the history of rocks:

This was the beginner’s wall. It took me a couple tries, but I made it to the top!

This was the not-so-beginner’s wall. I got pretty high, but I didn’t get all the way up. After about 2/3 of the way, my fingers weren’t strong enough to grip the rocks. I went full-on noodle hands.

At first, the hardest part (beyond the physical difficulty of pushing your body up a wall!) was letting go once you were finished! The first time I repelled down, I was white-knuckling the rope so hard my fingers were numb when I reached the ground! But after a few times, I learned to trust the equipment and Norman’s belaying skills. Overall, I really enjoyed this activity (so much more than rollerskating, which I still think is stupid!). I feel inspired to come back and get better at it. I want to improve my grip strength and keep practicing! I am definitely going to go back and keep trying it out. It was so much fun!

So, what was the bonus challenge? Okay, I’ll give you a hint:

Okay, so that’s not a very good hint. We went zip lining at the San Diego Safari Park! Yep, we strapped on some harnesses and rode at 40 mph down a 2/3 mile zip line! It was SO AMAZING! We first went down a practice line, which was pretty fun. But the star of the show was a line called the “Flightline,” which starts you off at 130 feet above the African Plains exhibit. When they release your harness, you fly directly over the African rhinos! While standing on this metal apparatus and getting strapped in, I made the mistake of looking down and seeing how high up we really were! I was getting pretty scared. And then the guide told us we weren’t allowed to scream because we would disturb the rhinos! I thought, “Great, I’m already trying not to evacuate my bowels with this and now I have to worry about not disturbing the rhinos?!?!” Before the guide released my harness, I had to shut my eyes. I heard the “click clack” of my harness releasing and felt my body move forward. After about two seconds, I opened my eyes and immediately starting smiling ear-to-ear! I totally had one of those “Look Jack, I’m flying!” moments. Trying to be conscientious of the rhinos below, I just made a very high pitched “eeeeeeeeee” sound, which then gave way to ridiculous school girl giggling for the rest of the ride.  It was awesome! 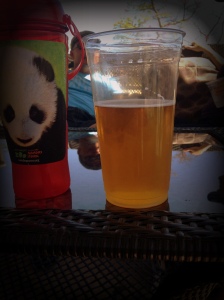 And a celebratory brewski  to boot!

What an amazing weekend! I have had such an amazing time that it’s going to be hard to go back to normal tomorrow. But it was so worth it, and I have this month’s challenge to thank for all of this excitement. I’ve stepped out of my comfort zone quite a lot in the last few weeks, and now I would like some time to reflect on it all. What have I learned about letting go, going with the flow, and losing control? That’s a question I’d like to ponder for a bit. I feel like there’s too many lessons to write them all now. So until next time, go out there and do something crazy!