I’m two weeks into August’s “Losing Control” challenge, and during the past week I ticked off another two items off the list of 8 activities meant to challenge my sense of control. Here’s a refresher of where I am so far:

I took the opportunity to do two more of these items while visiting my family in central California. My 6 year-old niece was visiting from North Carolina, and while she’s in town the whole world stops. We drop everything (or as much as possible) to spend as much time with her as we can. So I took the week off and drove up to spend a solid amount of quality time with my family. Luckily, this provided the perfect opportunity for Rollerskating and Mom’s Surprise Activity. I think my mom, the creator of the “Losing Control in August” challenge, planned it that way.

Okay, I’ll say it. Rollerskating is stupid and dumb and awful and I hate it.

I absolutely do not see the appeal of rollerskating. Where is the fun in strapping eight plastic neon wheels to your feet and rolling around in a circle looking like a total doofus whilst simultaneously trying to avoid cracking your head open? Now, I know plenty of people who find rollerskating quite enjoyable, people who relish in the neon disco lights and the feeling of sliding across the earth on wheels, people who savor every precious moment spent whirling and spinning in the rink. But let’s get one thing straight: I am not one of those people. In my book, rollerskating is right up there with going to the dentist, sitting in traffic, or paying taxes. Something you do under duress and only when absolutely necessary.

But, hey, it’s all in good fun, right? In the name of the challenge (and because the 6 year-old was all about it), I dragged myself to rollerskating with my family. And, obviously, I lived to type about it.  I started out as my usual, ridiculous self: clutching to the sidewall and uttering every curse word I knew under my breath (I would have done it more audibly if it weren’t for the copious amounts of children there). 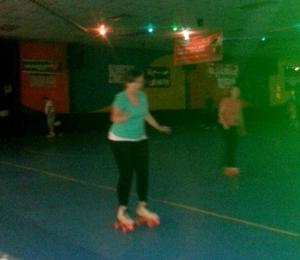 But while I’m on the subject of children – those gangly and bumbling kids were the worst part of the whole ordeal. While I eventually got my “skating legs,” and felt confident that I wouldn’t spontaneously plummet to the floor, the kids would whirl past me without paying attention. Other kids would just STOP right in front of me. I almost got bulldozed by a tween who wast texting (TEXTING!!) while on the rink. I eventually realized that what I hate most about rollerskating is not the act of rollerskating itself, but all the other rollerskaters corralled around me.

Another thing that I (and my mom) noticed is that rollerskating is quite obviously a generational activity. The best rollerskaters on the rink, apart from the employees, the ones who were not just bumbling in circles but were actually rollerskating well, were all over 40 years old. When you think about it, this totally makes sense. Rollerskating and drive-ins were teen hobbies of the seventies and eighties. For my generation, teens of the nineties and early two-thousands, we had shopping malls and video games. Contemporary teens and tweens have iPhones (hence the texting torpedo I encountered who was clearly caught in the throes of generational dissonance). Maybe if I were born in an earlier era I would actually like rollerskating instead of just resentfully tolerating it. But then again…

At the end of it all, rollerskating went fine. When I finally acclimated to all the kids and mid-age skating connoisseurs on the rink, I actually found it marginally enjoyable. The key word here is marginally. If my face in this picture, which is quite possibly the most ludicrously unflattering photo of me taken in the history of EVER, is any indication, I won’t be returning to the roller rink any time soon.

Before I arrived in Central California for my family time, my mom had already worked out what her ‘surprise’ activity’ would be. I got to my family’s house on Thursday and was told it would happen on Monday. By Sunday, my family had goaded the 6 year-old into believing I would be jumping out of an airplane, so that’s all she would talk to me about for a solid day-and-a-half. I have a dreadful fear of heights (and airplanes!), so my cute little niece’s prodding that I would need to “make sure the parachute is okay when you jump out” were like little thumbtacks stuck directly in the PANIC!! zone of my brain. As much as I wanted to believe that I would have handled it with stoic bravery if the activity had been skydiving or bungee jumping, I knew I would probably lose my shit if my mom expected me to jump off/out of a perfectly good bridge or airplane. And, in my nervousness, I made this clear to my family.

They, of course, looked right through me with indifference. I was doing the challenge, so I better just buck up and stop fussing about it.

I’m pretty sure my step-dad gave me this exact look.

They certainly did a great job of dragging it out, too! First we had to drive to Fresno. Then we had to take the 6 year-old and the rest of the family to see Planes: Fire and Rescue. While it was a cute movie, I would be lying if I said that I didn’t have a twinge of distraction the entire time thinking about what terrible fate might be waiting for me. Before we left for Fresno, my mom told me she would be doing the activity with me, which did make me breathe a sigh of relief: there was no way my mom would go skydiving or bungee jumping so I felt pretty confident that those were out. But still, my mom knows how to scheme, and I wondered if she was mustering up some bravery to push us both into doing something we wouldn’t normally do. By the time we walked out of the movie theater and got into the car to drive to the secret activity, I finally admitted it out loud: “I’m nervous!” I proclaimed, though it didn’t do any good.

After about twenty minutes in the car, I finally saw it…

I WAS WICKED EXCITED!! Trampolines are a bona fide symbol of my childhood: my best friends all had trampolines in their backyards. I spent many a young afternoon jumping on a trampoline until my feet were black and my butt was sore from doing so many launches. The thought of an ENTIRE ROOM of trampolines?!?!?! I immediately got a big goofy smile on my face! As soon as we got in there, I instinctively started jumping all over the place. I was a jumping fool!

Ironically, the person who had the most apprehension with the trampoline room was my mom! She had never been on a large trampoline before, let alone a whole room full of large trampolines. The 6 year-old was nervous about it at first (that’s her in the blurry photo), but eventually warmed up to it in true, fearless 6 year-old fashion. But my mom was a little on edge for the first twenty minutes or so. But eventually, she got the hang of it! By the end of the hour, we were both doing butt launches and jumping off trampolines into a giant foam pit! What a trooper!

I put my control and my (sometimes shaky) faith in my mom to choose a surprise activity for me, and boy did she deliver! Way to go family, you’re pretty alright.

That’s another two activities that can be checked off the list! I’m halfway there!

But hold on to your hats, ladies and gents. This weekend I’ll be checking off another three items from this list! Here’s my weekend itinerary:

(Note to self: try not to be the awkwardest person in the room)

Saturday Afternoon: attend Elisa’s day-long outing, about which I know absolutely nothing.

Sunday Morning: Attend a yoga in the park Meetup outing alone for a different Meetup group (which I also joined yesterday).

Sunday Afternoon: Get my week’s worth of groceries from a friend of a friend.