Hello everyone! Well, I’m 19 days into June’s ‘No Makeup’ challenge. The first two weeks of this challenge filled me with positive energy, but that momentum has started to slow this week. For the first time since starting the challenge, I’m actually starting to miss makeup. This past week I have started to feel plain, and I wanted to put on makeup to make that feeling go away. Now, I know what you’re thinking – makeup can’t fix bad feelings. And that is so true! But when your bad feelings are connected to not wearing makeup, putting on makeup seems like the most direct remedy. But I know that the more long-term, lasting remedy is to explore why I feel plain in the first place. So, here it goes.

I suppose a more elaborate, and accurate, way to describe what I feel is “unremarkable,” which I take to mean ‘not particularly interesting or note-worthy’. There could be A LOT of reasons why I feel unremarkable that have nothing to do with my lack of makeup. I’m currently single and not really looking to get back on the dating scene – so I don’t really notice men and (I assume) they don’t really notice me either. My dissertation research has reached a hiccup and I feel stalled with that. And generally (this might sound silly), my life feels relatively stable right now. I’m not sure how ‘stable’ translates into ‘uninteresting’, but who knows! I’m a complicated creature!!

So, what happens when you throw into this mix the ‘No Makeup Challenge’ and take away something that I use, as a tool, to feel more remarkable? I start to feel plain. Perhaps it is because makeup has been a crutch, a mask I can put on to make myself feel, if nothing else, not plain. One way that I do this is by playing up some features that I like. For example, I have long eyelashes so I like to wear a lot of mascara to really get some ‘oomph’ into them. I get compliments on my lashes, too! But even if no one notices, I notice, and somehow that makes me feel better. Without makeup on, I don’t get that added ‘oomph’ and somehow that makes me feel plain. Now, I do want to acknowledge that feeling plain is A LOT better than what I anticipated I would feel during June. When starting this challenge, I was worried that I would feel ugly or disgraceful. I’m happy to report that I have not felt ugly, not even once, during this challenge. But, starting this week, I have felt plain.

Once I started paying attention, I realized that I may have started doing the inverse of what I did when I first started the challenge. Do you remember how, at the beginning of the challenge, I was dressing down in order to have a look that was more consistent with no makeup? Well, I ditched that in the second week and felt much better. However, I noticed this week that I have been wearing my hair down, and curly, every day this week. It takes a fair amount of time to get my hair to do this – about 20 minutes. Most days, I can’t be bothered with drying or curling my hair, so I’ll throw it up into a cute, bo-ho braided updo. I like doing these updos, and I get a lot of compliments on my ‘cool’ hair. But this week, I realized I was avoiding wearing my hair up and fully exposing my bare face because it felt like too much. It’s like I needed to have my long, wavy locks in order to feel not plain, to feel more remarkable.  In other words, my post-makeup hair took the place of my during-makeup eyelashes – it gave me an oomph. So today, I decided to just go for it. I pulled my hair back into some french braids and a bun and decided that whether or not I felt plain, I needed to push myself to be challenged. I felt plain for a while, and I still feel plain to an extent, but the feeling has diminished throughout the day, probably since I’ve decided to stop obsessing about it.

And in the end, what is plain anyway? I just ran into a friend of mine, and she told me she really liked my braided updo hair and the top I’m wearing today. And there I was, feeling all plain! I guess plain is a relative concept. We feel plain compared to other people, compared to ourselves on other days or at another time, and by comparing one part of ourselves to another part of ourselves. At the end of the day, maybe we all feel a little plain. 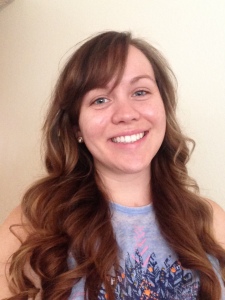 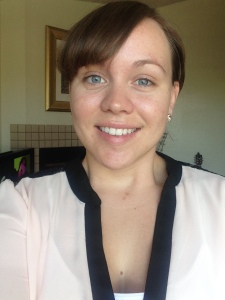 Me throughout the week…

What’s Mascara Got to do with Professionalism, anyway?

Okay, keeping in mind today’s challenge to just ’embrace the plain’ and go with my hair pulled back, today I faced a situation where I felt I might not make a good impression without makeup. I had a meeting with the Chief Operations Officer of a local nonprofit organization to discuss my research. I had never met him before and I wanted to make a good first impression. As I was getting ready for the meeting, I felt VERY uncomfortable with the idea of going into this professional setting without any makeup on. Now, here was the internal dialogue that happened in my head:

“Uuuuugh. I can’t believe I’m not wearing makeup to this meeting.”

“Why? Why is that bothersome?”

“Because, I want to make a good impression, so I want to look nice.”

“Well, you do look nice. You’re wearing that nice top and your hair is pulled back, very professional.”

“What’s wrong with your face?”

“He won’t take me seriously if I don’t have makeup on. I want to look put-together.”

“If you want to be taken seriously, then speak intelligently and with confidence. Don’t just look put-together, act like it.”

I knew my more rational self was right. If you want to be taken seriously, then act seriously. Command attention and respect through your actions, your speech, and your body language, not just with your looks. But despite knowing that I am competent and perfectly capable of making a strong impression based on my merits, I still felt like having makeup would give me an added boost. As I drove to and from my meeting (which went great, by the way), I started to dissect this notion that in order to look professional, we need to look put-together – and in order for WOMEN to look put-together, we need to be wearing makeup. Think of any makeover show you’ve ever seen, can you imagine any of those stylists recommending that a woman not wear any makeup to a job interview?

Our society has constructed a strange connection between makeup and professionalism for women, and this construction puts them in a double-bind: if you wear too much makeup  you won’t look professional, and if you wear too little makeup  you won’t look professional. To be sure, this double-bind doesn’t just exist in women’s minds – there are data that show how a woman’s appearance affects her professional evaluations. So women are left negotiating this Goldilocks approach to makeup – not too much, not too little, just the right amount – in order to put forth a professional persona. But at the end of the day, shouldn’t professionalism be more about behavior than appearances? This is not to say that men do not face social pressure when it comes to their appearance, but that tireless negotiation between too much/too little, too young/too old, too bright/too drab when it comes to makeup and professionalism is a burden unique to women, and it is most certainly the product of patriarchy. Despite feeling uncomfortable initially in my meeting, by the end I felt like my normal, intelligent self. And in that moment, that tiny and fleeting moment, I declared my independence from the makeup double-bind in the workplace.

Till next time, thank you all, again, for your continued support! I means the world to me!