It’s been a week of no makeup, and I’ve been through a ringer of emotions. Luckily they’ve been mostly positive.  So let’s break down the week.

I had to go to campus for a workshop and a couple meetings, which was then followed by dinner out with friends. Now, typically I would wear a full face of make-up for both occasions. The workshop was with other graduate students as well as visiting alumni of our program. I also had meetings with faculty and some of my students. I was a little nervous because none of the people I was interacting with had ever seen me without makeup. As I got to campus, I felt strangely naked. I can count on one hand the number of times I’ve showed up to my department without makeup. I remember because on two of those occasions someone has said to me, “Are you okay? You look tired? Are you sick?” Which is really just a nicer way of saying “You look uglier than usual and I don’t know why.” So of all the (five) previous times I’ve gone to my department without makeup, it was because I was so rushed to get out of the house in the morning that I didn’t have time to put it on OR I was utterly exhausted from a late night of writing/reading/grading and, due to my delirium, simply didn’t give a shit.

So when I showed up to my department on Monday, bare-faced and fully rested, things felt a little off. I was sure that I must have looked as if I was rushed or tired. I just tried to ignore it and get on with my day, but I couldn’t shake the feeling that I was missing something. After the workshop, I mentioned to one of the other grad students that I wasn’t wearing any makeup and that I felt weird about it. He leaned back a bit and looked me over, then said “Huh. I’ve never seen you without makeup.” I waited in dread to hear him utter that stupid candy-coated insult ‘you look tired’. But he didn’t. He just said, “Well I didn’t notice until you said something just now.” And with that simple, negligible sentence that he has probably forgotten all about, I was set. It made me remember that no one is actively scrutinizing my face as much as I am. For the most part, everyone is just kinda doing their own thing. And most of them are probably too worried about themselves to notice my lack of blush and mascara. And, for the record, if anyone out there is scrutinizing my face more than I am, I probably wouldn’t like them anyway.

I eventually went to dinner with my friends and I felt slightly better about the whole thing. I still felt a little naked, like something was missing, but it didn’t feature as prominently in my thoughts. It was something to acknowledge and then move on, like realizing its cloudy outside or that your socks don’t match after you’ve left the house. What are you gonna do? Plus, on the way to and from dinner I put on some ABBA and rocked out to “Dancing Queen,” which shook off a fair amount of my negative thoughts. Seriously, if you’re ever feeling down just thrown on “Dancing Queen” and allow yourself to NERD OUT in awkward dancing. 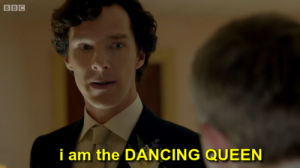 With the initial difficulty of facing my students and colleagues without makeup over, it felt much more comfortable for me to go without makeup for the rest of the week. I absolutely relished in how much FREE TIME I had in the mornings. It normally takes me about an hour to get ready, and now it took me only 30 minutes. The only discernible departure from my ‘normal’ life was that I noticed that I was dressing and wearing my hair more casually during these days. Normally I wear my hair either down or in some kind of braided updo. I’ll wear dresses and long earrings too. But on these days I realized that I was dressing much more casually – wearing work-out pants  and throwing my hair into a bun or a simple braid. It wasn’t necessarily conscious at the time. However, once I noticed what was happening I started to reflect on it. I was feeling so proud of myself for getting over the challenge on Monday that I hadn’t realized that I was simply addressing the same issue in a different way. On Monday I kept feeling like something was missing, something was off. Once that feeling went away, I thought I had mastered it. But I soon realized that I simply adjusted my overall look to be consistent with a make-up free face. I normally like to look a little fancy, but something about having a bare face made me feel like being fancy just didn’t fit. This is, of course, ridiculous. You can dress as fancy as you want and still not have to wear makeup and, chances are, no one is even going to notice anyway. The idea that a woman needs make up to go along with the rest of her body is just silly.

All this is to say that, when I go out for dinner and drinks tonight, I’m gonna get fancy.

Yesterday was full of revelations! My roommate and I were having a small party and, as I was getting ready, I desperately wanted to put on makeup. How do you have a party without putting any makeup on?!?!?! The idea was completely foreign. It just felt wrong. But of course, no makeup was the only way it was going to be. And, as you could probably guess…

Eventually, in the company of friends and a few vodka sodas, I forgot that I had a bare face. A couple of people who knew about the blog asked me how it was going and how I was feeling. They were so encouraging. Eventually the strange feelings fell away and I found myself having pure, unadulterated fun while being makeup-free. And I never really felt ugly. I felt, oddly, free.

And that feeling continued as I went for a (very) late-night dinner with a friend. Maybe it was the encouragement from friends, maybe it was the vodka sodas, but I came to realize that, somehow, not wearing makeup had made me feel more confident.

Now I know what you’re thinking – Isn’t it supposed to be the other way around?? If you have ever seen any cosmetic commercial or watched any make-over show on television or basically existed in the American consumer society, you’ve heard the same message again and again – the right makeup can make a girl feel unstoppable. Well I’m here to say that the opposite is starting to occur for me. It’s puzzling to deconstruct, because I do have moments of feeling insecure. But in general, here’s what I think is happening – without makeup I am literally just putting myself out there. No mask, no enhancers, all (perceived) flaws on full display. It’s like I’m communicating to the world, ‘This is me’, and there’s something about that that makes me feel empowered. I don’t have to worry about if they’ll see my flaws or if I don’t look perfect, because I was never perfect nor flawless in the first place. And instead of covering them up and only exposing that side of me to people I trust, I’m letting everyone see that I am absolutely not perfect. And somehow, in that moment, it’s like I have nothing to lose. Suddenly I feel confident and capable. And those pesky ‘flaws’ start to lose their power. My blemishes seem less menacing. My oily skin seems more ‘glistening’. My uneven skin tone feels like it blurs. And as I realize this, I am also realizing that I am putting out into society an alternate narrative – ditching her makeup can make a girl feel unstoppable.

Other Tid-bits Worth Sharing

1. People have come out of the woodwork to support me and send me articles about going make-up free. That is awesome!

2. Friends and family have confided that my challenge is making them reflect on their own relationship with makeup. I’m humbled by that. If my challenge can help others reflect and become self-aware, I’m ALL about it. I’m grateful for their support and I’m happy to support them too.

3. Ladies, if you’ve ever worn makeup while at the gym then you know the feeling of having to ‘pat’ or ‘blot’ your face with your towel when you get a little sweaty. If you wipe too hard you’ll smear that shit all over your face. Well with out makeup, I thoroughly wipe down my face with that towel and it feels GLORIOUS. Which is good because, without my makeup soaking up all that sweat and caking up, I’m sweating more and somehow still don’t feel gross about it.

4. No more being dainty about touching my face or my face touching other things. I watched The Normal Heart and bawled my eyes out without having to daintily wipe my tears so as to not mess up my mascara. I hugged a male friend wearing a black shirt without worrying that I would get foundation on his shoulder. I got something in my eye in the middle of the afternoon and could flush my eyes with water freely. I don’t have to worry about smearing or smudging.

5. I’m anxious to see what happens next week as I go even further into the challenge. I am excited but a little fearful that this positive momentum may die off a bit. But I’ll cross that bridge when I come to it. In the meantime, I’m enjoying myself and learning a lot! 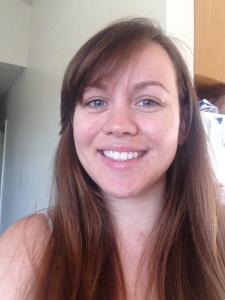 3 thoughts on “Day 7: Getting to Know Myself”